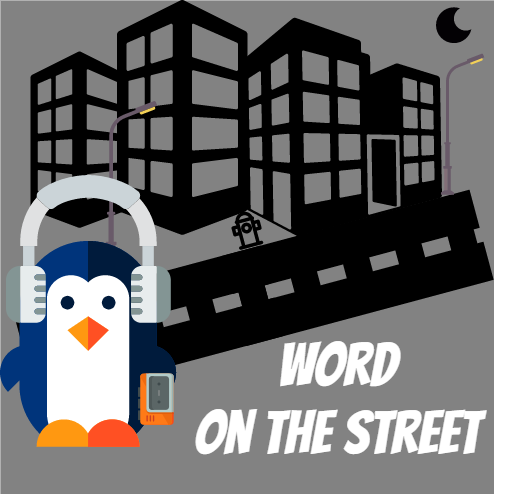 In the first in a series of monthly posts, our resident DJ, George, gives us a round-up of January’s offerings from the urban side of music culture. Gunfingers and dancing shoes at the ready!

2017 is off to a great start. It’s always pleasing to say that I’m struggling with the amount of music to consume at any given time, and it certainly feels that way right now. Given how little music is usually released in the run up to Christmas, January always feels like a blessing, but this year in particular seems to be setting a high standard already.

Of course, there’s no finer way to set the bar high than with the return to form of a legend. After a few years in the commercial wilderness – I read somewhere that he was trying to make more money to offer a better quality of life to his daughters, so fair play – Eskiboy is well and truly back in the grime fold, with the release of the aptly-titled “Godfather”, his eleventh (eleventh!!!) studio album. Having been pushed back multiple times, with Wiley himself threatening to cancel its release altogether and stating it will be his last, it’s no surprise that it’s an absolute joy to listen to. It’s the perfect length at 17 tracks, and just under an hour, and is littered with features from some of the biggest names in the scene (JME, Newham Generals, Skepta, P Money).

But it’s solo track “Back With A Banger” on which the King of Grime really shines. I can’t think of anything better than Wiley going hard for 3 minutes over a flawless Preditah beat, and no lyrics are more fitting for heralding his return than when he announces “anybody wanna know what I’m doing right now, go tell ‘em that I’m back with a banger”. Elsewhere, there are highlights in “On This”, featuring his long-time prodigies Ice Kid, Chip and Little D, and a killer link-up with Devlin on “Bring Them All/Holy Grime”, which you can watch below. Following that, I strongly recommend you take an hour out of your day to immerse yourself in grime perfection.

Speaking of Devlin, the Dagenham native’s comeback continued with the release of his latest single, “Blow Your Mind”, complete with a chorus from Maverick Sabre. I’m slightly biased, hailing from nearby Essex myself, but, like Wiley, he’s been gone too long, and I for one am excited for him to unleash his new album, “The Devil In”, later this year.

Elsewhere in grime, President T snuck in at the end of 2016 with the release of “T On The Wing”. As with “Godfather” there are numerous collaborations with other contemporaries from the scene, but again it’s a solo track that provides the highlight, and closes the album – “Ending Careers”. The Meridian Crew member, and Boy Better Know affiliate, lets loose over Danny Weed’s classic 2004 instrumental “Salt Beef”.

It’s been a while since I’ve heard a Lethal Bizzle track that I actually enjoyed, so imagine my delight when I heard him accompanied by Giggs and Flowdan over a classical/choral influenced rhythm produced by Heavytrackerz. Hopefully “Round Here” sparks another return to form in 2017.

Also produced by Heavytrackerz this month is “Rain Drop”, the latest single from French grime trio Perfect Hand Crew. In the interest of honesty, I feel obliged to divulge that I personally know PHC, but that takes nothing away from their ability, especially given that they’re making music in something other than their native tongue. In fact, the memory of having watched Tasty Took freestyle in English at an early hours afterparty in Montpellier after many drinks still blows my mind to this day. Check out the track and it’s amazing video below.

Having already confessed to one personal conflict of interest, I should perhaps start this recommendation with another disclaimer: I’m a Birmingham City season ticket holder, and am therefore a fan of this video having been shot in the car park at St. Andrew’s. Don’t let that put you off though. Give Jaykae’s “No” a go – it’s been co-signed by Logan Sama no less!

Finally, while listening to Sian Anderson on 1Xtra this month, I was introduced to 17 year old South Londoner, Dis, by way of her take on Beyoncé and Sean Paul’s “Baby Boy”. I’m not completely convinced by her lyrics and flow, preferring the production (possibly influenced by Lolingo’s grime re-imagining of Amerie’s “One Thing”?), but at such a young age she should be considered one to watch.

Moving away from grime (but only just), Coyote Records this month released the second album from American producer Letta. His take on R&G (rhythm and grime to the uninitiated – check out this excellent 25 track introduction to the fascinating sub-genre here), influenced by his own battles with homelessness and addiction, continues on the excellent “Redemption”. The album has an ethereal, futuristic feel – I like to think that Rick Deckard would pour himself a dry smokey (worms included), and listen to this at home, after a long day of tracking replicants.

In a similar vein, comes the debut EP from Klasey Jones, one of the most promising producers in the UK’s wave scene. Unsurprisingly, given that he is pushing the scene more than anyone else, “Foreign Buyers Club” is released on Plastician’s Terrorhythm label. I’m intrigued to see where this sound will go, particularly as it seems to have emerged almost solely from Soundcloud producers.

On the dancier side of the scene, South London producer Jynx (who was on the buttons for one of my favourite remixes of 2016) put out four tracks of stunning quality on the “Saffron City” EP. There are so many influences I can hear that it would be almost impossible to list them all, but in general you could take the best of R&B, UK funky/garage, Burial-style dubstep, and even 90s house, and you might get close. “Saffron City” and “Calm Mind” are particularly good.

Having mentioned UK funky, that brings me on nicely to two serious contenders for my favourite tune of 2017 (yes, I know it’s only January!). The astounding thing about these tunes is that they are both released on the same label. Roska seems to be consistently finding the best new talent to showcase on his Roska Kicks And Snares imprint, and with Murder He Wrote he is continuing this trend. For most of 2016, and to anyone who would listen, I waxed lyrical about how Murder He Wrote was destined for greatness. His output has improved exponentially with each release, and it’s with “Watch The Tempo” that he seems to have outdone himself again – a serious, bass-heavy, funky roller complete with hip-hop breakdown.

The second fine release on RKS in January comes from Roska himself, this time collaborating with bassline guru Champion. “Flame Grilled” combines the best elements of UK funky/garage and late 2000s bassline. Should you have the (mis-)fortune to catch me DJing somewhere this year, you’ll be sure to hear both of these.

Dave doesn’t sound like the most inspiring name for an up-and-coming English rapper to have chosen, but don’t let this fool you when it comes to the potential for being the biggest name in UK rap and R&B. Having already had his single “Wanna Know” remixed by Drake last year, he continues his quest to become the UK’s equivalent to Toronto’s finest with new track “Samantha”, alongside fellow rising star J Hus. Get ready for these two to take over in 2017.

You may have noticed that there is a glaring lack of anything from the other side of the pond in this round up (mainly because all the big releases only went live yesterday – see below). To tide you over until next month, when hopefully there’ll be more Stateside sounds for me to cover, here’s Missy Elliott’s latest, bonkers-as-always video for “I’m Better”.

Before signing off, we should cover any other business. There are always too many incredible club nights to be able to attend them all, but two in particular that I’m hoping to make it to in the coming weeks are Boxed’s 4th birthday at Phonox in Brixton on 3rd March, and Kode9 doing a one time only history of Hyperdub set at Archspace on 24th February. If you’re attending either, maybe just shout George really loud, and you can tell me how awful and long-winded this post was.

Club culture in general is one of my passions, so I’m always keeping an eye out for any documentaries on this topic. At only 26 minutes long, Annie Mac’s Who Killed The Night? isn’t given enough time to really establish what is going on with nightclub closures across the UK, but is worth watching nonetheless before it disappears from the iPlayer.

Since the Viceland TV channel launched in the UK, I’ve hardly watched anything else – you should check out Abandoned in particular, which satisfied my strange fascination with derelict buildings and ghost towns. It’s Big Night Out that I want to draw your attention to though. Clive Martin, journalist and Head of Brand Development at ASOS, converts his excellent Big Night Out column for Vice into a documentary series, exploring the weird and wonderful in nightlife experiences across the continent. If I were you I’d watch it just to see how awkward he seems in certain situations, and for his attempt to not puke in front of Carl Cox.

Finally, in they-only-came-out-yesterday-so-I-haven’t-had-time-to-listen-to-them-properly-yet news, there were releases for Drake collaborator Gabriel Garzón-Montano, America’s Got Talent finalist turned legit R&B talent Kehlani, and, most significantly, Atlanta trap trio Migos (this one is already on constant rotation, so check out “T-Shirt”, and the huge hit “Bad And Boujee”). “New Gen” also looks like a very promising compilation showcasing the next wave of grime, R&B and spoken word talent. You can expect all of these to either be reviewed in the next week or so, or feature in next month’s round up.

If you’ve read this far, thank you for putting up with my waffling. I know this was a long read, but there’s genuinely so much to cover in one month, across multiple genres. We’ll see if I can trim it a bit next time!

If you discover something you love, or want to tell me what I’ve missed (or that I’m wrong!), then get in touch via astralpenguinsmusic@gmail.com. Most of the tracks mentioned above can be found in the Spotify playlist below. See you all in a month!